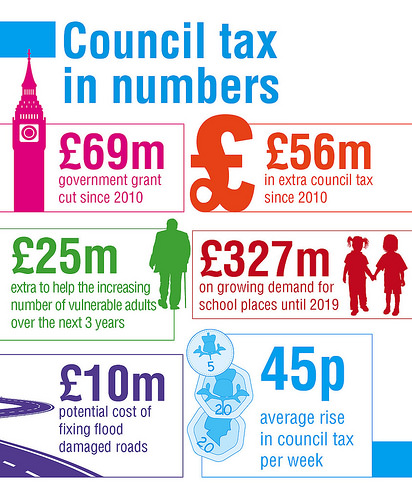 Leader David Hodge said: “We’re proposing a 1.99% increase even though we’ve said we need 2.5% because any more means wasting up to £2 million on a referendum and while it puts more pressure on services we’ll still be able to provide what residents expect with this increase.

“With the number of vulnerable adults we help increasing by 1,000 over the next three years at a cost of £25m and a leap in pupil numbers meaning we need to spend £327m on school places by 2019, the pressure on services from demographic changes is enormous.

“On top of these challenges, we have to cope with the impact of other costs that are also completely out of our control, such as the bill of up to £10m to fix our roads after the recent floods and the £5m we spent last year on repairing the damage caused by ice and snow.”

The proposal will allow key services to be preserved as the council continues to face the challenges of rising demand and shrinking government funding.

Despite making savings of £200m since 2010, all these have been wiped out by a dwindling government grant and increasing demand for services. The council has identified a further £200m of savings over the next four years but these pressures will remain.

The council’s Cabinet will meet to make a formal recommendation next Tuesday (4 February) and a final decision will be taken at a meeting of Surrey’s Full Council on 11 February.